Like everyone, we cannot predict when our next event will take place, all we can do is ask that you keep an eye on our social media and we will endeavour to post updates

Thank you for your continued support and we hope it wont be too long until we meet again.

from everyone at the market! 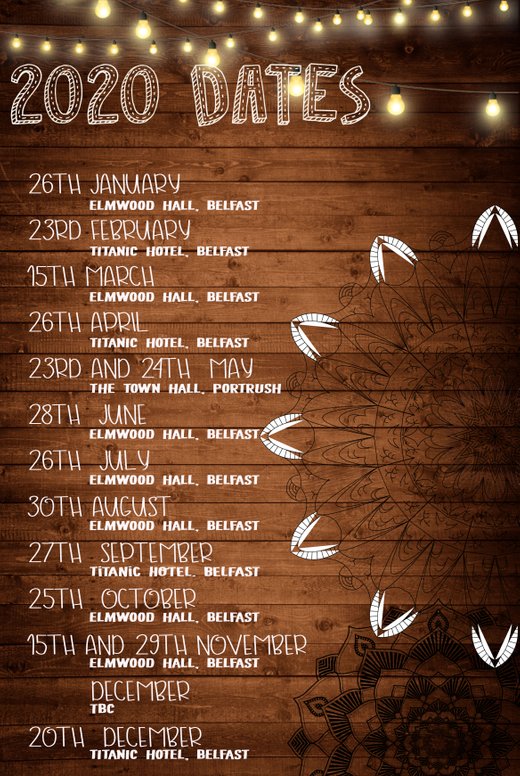 The FINE & DANDY MARKET, founded in May 2013, is a monthly market, showcasing the work of independent artists, designers, illustrators, craftsmen and food producers.

Our next markets will be held in the beautiful Elmwood Hall, Opposite Queen University, Belfast, Drawing Office One, TITANIC Hotel, Titanic Quarter, Belfast and the Town Hall, Portrush

Please keep an eye on our website for a fourth venue with further 2020 dates being announced in the New Year.

It is situated opposite Queen's University Belfast. The Hall was built in 1860-2 and is a mixture of styles, principally Italianate with a spire on top of a campanile. It was designed by John Corry but not actually erected until 1872

TITANIC HOTEL Belfast has been named Hotel of The Year 2018. Situated in the heart of the Titanic Quarter, the world's most authentic Titanic hotel. The transformation of the legendary Harland & Wolff headquarters and spectacular Drawing Offices is now complete. Belfast's newest boutique hotel offers an unforgettable experience for anyone visiting Northern Ireland

The Drawing Offices were built in the late 1880s when the company was emerging as one of the world’s leading shipbuilders.  The Harland & Wolff Headquarters building was once the nerve centre of the largest shipyard in the world.

Hundreds of ships were designed in the Drawing Offices and constructed on the adjoining slipways, including the legendary White Star liners

Olympic, Titanic and Britannic and the naval warship HMS Belfast.

The magnificent dual Victorian Drawing Offices, with their three-storey high barrel-vaulted ceilings, are the only surviving example of this type of architecture in the world.

PORTRUSH TOWN HALL is a fine example of Victorian municipal architecture (it is grade B1 listed) and offers the discerning conference/meeting organiser a venue with historic character, right in the heart of Portrush. Designed by the famous architectural firm Lanyon, Lynn and Lanyon, and built in 1870, Portrush Town Hall was the headquarters for the local council and was one of the glories of the

sea front. Indeed it has always been regarded as a landmark of the town.

It was designed in Scottish baronial style complete with gables and a 'witch's hat' turret. Internally too, it was an imposing construction with its circular reading room as an unusual central feature.  In 2004 an extensive 18 month restoration and refurbishment programme of both the interior and exterior building commenced, completing in January 2006